Posted on December 26, 2012 by steveaustinbellacitta 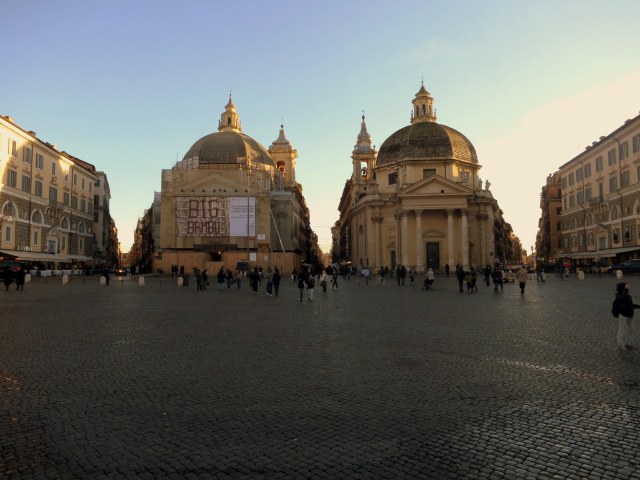 This is the Piazza del Popolo, and before you is one of the most famous views in urban planning – wayfinding for the masses.

In 1500 a visitor to Rome entered the city’s main gate, the Porta Flaminia, and was immediately challenged with how to navigate the maze of medieval streets to find any destination.

In 1600, thanks to the urban design genius of Pope Sixtus V, when a visitor came through the Porta Flaminia, they had three easy choices by which to navigate the city.  To the right is the heart of the medieval city, with its monuments and churches; the street leads to the Tiber River, from which one could get to St. Peter Basilica. This is the least developed of the three streets.  In the middle, along Via del Corso, one could go straight to the heart of classical Rome: the Forum and Coliseum.  That’s the “Wedding Cake” terminating the view in the distance – exactly one mile away. To the left, one could go to the newly fashionable district around the Piazza di Spagna and, with help of a redirected axis, from there off to the Quattro Fountane and the Church of Santa Maria Maggiore.

From this spot one could get basically all the Rome one needed.

Never before had such a bold solution solved so many urban problems.  Prior to this time, Rome was a medieval city struggling to cope with tens of thousands of pilgrims and others every year – something was needed to give them a way to more easily navigate the city

This square (actually a large oval) is a prime example of the “next hand” theory of urban design.  It took from the mid-1500s till now to get to where it is….it wasn’t a prepackaged “design solution.” Rather it was an expression of the ideal and it was understood to take generations before that expression would be fully realized.  Who now wants to be the one to simply start something as opposed to the grand master who delivers the final masterpiece intact and inviolate?

The space is very large – too large;  its something to be crossed, not lingered in.  The scale is such that one feels very small.  In the early 1800s, the urban designer Giuseppe Valadier, thinking in three dimensions, linked the Piazza to the urban garden above.  While the idea is magnificent, the link is tenuous, however.  The duel churches were inspired, and they add such a strong coherence to the scene it is very difficult to tell that, while they are complimentary, they are not symmetrical at all.  (Although it is hard to see with the church on the left under wraps.) Until a few years ago, the Piazza was used as a parking lot, diminishing the effect of the design concepts.

Yet overall it worked – for the 16th century.   And because of it Le Notre envisoned Versailles as the supreme expression of city planning – with trees not buildings.  From there L’Enfant drew Washington D.C.

But, Pope Sixtus V, are you still relevant today?  Or is there a new way of connecting people to cities?

With mobile GPS, instantaneous communications and rapid mobility is there a need for such obvious urban planning.  Will we ever again allow one individual to impose their will on such a large city?  Will we ever condone the social injustice of removing people and buildings that are in the way of “great planning?”  Will we desire to return our cities to the scale of the individual and not the masses?

This entry was posted in Uncategorized. Bookmark the permalink.