Posted on March 25, 2013 by steveaustinbellacitta

Urban planners in the mid 20th century really got a lot wrong.  In fact, from this distance, it seems as if they got everything wrong.  In simplistic terms, they insisted that that old was bad and modern was good, that cars should come first, and that housing for the masses should be mass produced.  As if with a twinge of guilt, to offset that, planners decreed that housing should be placed in meadows of green.  Green is good for housing right?

Well, when it is done like this, not so much.   So many cities in England and North America have residential areas like this.  They are low density odes to some perceived benefits of a pastoral life.  The thinking seemed to be:  “Cities bad, polluted, dark, and scary.  The suburbs good and bright, clean and healthy.” To a certain extent, there was some truth in this.  Many industrial cities prior to World War 2 were not nice places to live.  But the other extreme to which the planning for these suburban areas created a whole new set of problems.

This is a housing estate of about 400 units that was built from the late 1960s into the 1980s.  My experience tells me that this place will be a colossal failure in meeting the realities of the 21st century.  For one, this place requires very high energy inputs to make it work. The low density and single land use of the development ensures that no one does any meaningful walking. These two factors also combine to make mass transit use inefficient.  The development sprawls up the side of a very steep hill, ensuring that biking is limited for most people.  Thus by default, private cars are by far the dominant form of transportation.   Any community that is over-reliant on private automobiles is extremely vulnerable to energy and financial shocks.

Another energy related issue is with the houses themselves.  While they have better windows than many much older buildings, all in all they appear to be rather flimsy.  They lack the dense building material that can make it easy to regulate temperate year round.  The low density groupings of no more than four units per building also limits the conservation of energy via thermal mass.

On a smaller energy scale, but important symbolically, is all that grass.  It has to be mowed, which these days means gas powered machines.  More importantly, that grass represents the value of consumption over production;  those green areas do nothing for anyone or the environment.   They don’t produce food,  fiber, or energy.

So this is a high energy place, with a large, primarily carbon, footprint.  This is what I would consider to be the antithesis of a truly sustainable community.

The design of this place also shows glaring weakness in meeting the social needs of the 21st century.  Planners in the 20th century never understood the difference between an ideal density and crowding.  In the reaction to horrid overcrowding in industrial cities, planners spread out houses in an attempt to introduce open space, thus reducing the anti-social effects of crowding.  In the trade however, they lost the benefits of density.  Those benefits are numerous and have been detailed by urban luminaries such as William H. Whyte and Jane Jacobs.  Two of the most important benefits of density are increased security and the serendipitous social effects of random meetings. 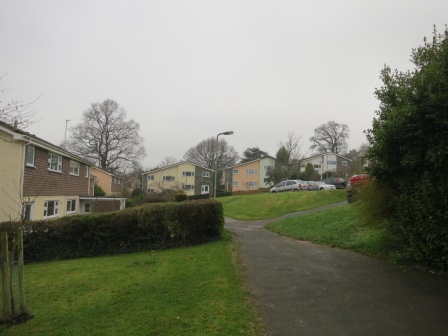 These low density developments have an eerie quietness about them.  The houses are so far removed from the street that it feels quite risky walking on them.  Not that anything is likely to happen, but it is an unsettling feeling just the same.  This contributes to the lack of meaningful waking here. This lack of walking lessens the possibility of meeting someone offhand and having a conversation.  This leads to an increased feeling of isolation, which is unfortunate at a time when creating true community is more important than ever. 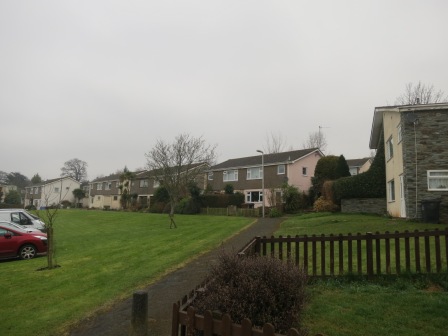 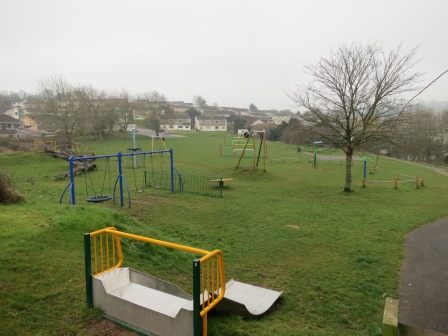 Finally, this development is just a mass of random greenspace.  Public, semi-private, and private spaces are ill, or even not, defined.   It is unclear where people are supposed to be or not supposed to be.  The result is that the spaces become no-man’s lands, avoided by everyone but the anti-social (and teenagers.) They are random, uninspired and uninspiring.  The architecture of the development was not used to create street scenes nor frame the green spaces.

Here’s an alternative vision.  New building masses are combined with those existing.  These new buildings will be residential, commercial, and even hand-scale manufacturing.  Every building will also be an energy plant, with solar panels and small windmills.  Parking areas will be redeveloped as building sites;  only on-street parking will be allowed.  Streets will be reclaimed into living streets using low-impact-development methods.  The open green spaces of the development will be better defined by the buildings. Pavement will be placed in gathering areas, and the rest of the open spaces will be put to productive use.  These lands will be used for production of food and fiber, harvesting rain water, as well as generating solar, wind, and biomass energy.

This area could support 50 years of new growth in the Totnes area as well as become a true model of sustainability.  How daring are the visionaries of the city and region?  How truly daring is Transition?

This entry was posted in Uncategorized. Bookmark the permalink.